Submerging with an aqualung

Kaliningrad is a part of former Soviet Union, now part of Russia. It is obvious that annexing it to Lithuania would have been difficult if not impossible, as it was and still is a very important naval base.

The first thing to catch a visitors eye is submersible Pisces VII. Pisces (Paisis) stands for fish, and the numbering tells that it is not a unique underwater vessel. These “fishes” comprise some of the oldest submersible vessels used by the Soviet Academy of Sciences used for underwater research. It can dive down to a depth of 2000 m.

These submersible research submarines were manufactured in the late 1980’s by Rauma-Repola Oceanics in Tampere, Finland. Manufacturing submarines for the Soviet Union caused a minor foreign political crisis. United States of America did not approve their manufacture and delivery to U.S.S.R. There was a clear motivation for this. These submersibles could dive to 6000 meters, a depth formerly only reached by U.S.A. submarines, and so they challenged the supremacy U.S.A.

Nikonov’s diver from the 17th century. We believe that this diving setup could actually work [but the helmet requires a lot of weights!], but it definitely belongs to the category “Do not attempt this at home (and especially not alone)”. Pay attention to the divers boots. They are worth a test dive! Who could to that sort of rope work? 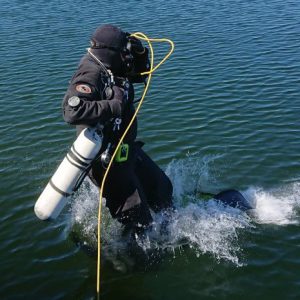 Diving is a splendid hobby. It caters wonderfull views under the ice on a sunny winter's day and on other days one can venture into exciting submerged mines. Search and recovery diving and historical diving both add to the diversity of the hobby. And abroad there are warm waters and major adventures, although these seldom coincide. Add some publishing and web maintenance and you'll end up with a varied hobby that I can only recommended! I am most proficient in search and recovery diving and in sump diving (a form of cave diving).

Videos of diving and caving

At the moment I am maintaining two websites besides this one and am editor-in-chief of Luola, the journal of Finnish caving society. Other associations that I hold dear include my dive base Sukellusjaosto of Turku YMCA and the information security society TurkuSec.

This site uses Akismet to reduce spam. Learn how your comment data is processed.